Each team consists of 4 players one each of each ranking A, B, C, D.

New teams are drawn prior to each season

A match consists of -

In a result of a tie, a 4 person team 701 match will be played. Winning team will be awarded 1 point and the win.

first time playing for a sub. Money collected for each season goes towards our end of the season banquet which includes food, trophies, and a Luck of the

Draw in which anyone who played during the season (full or sub) is allowed to participate. 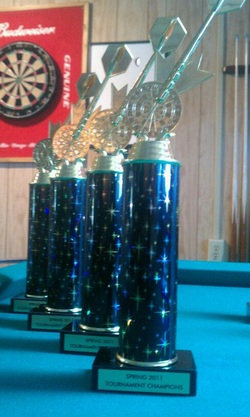